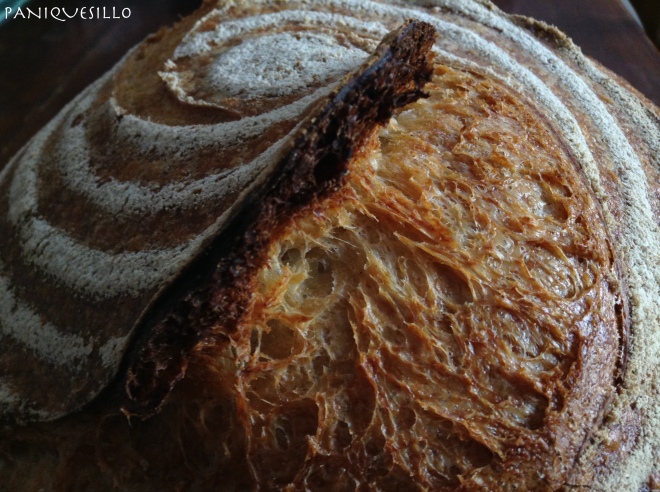 We all know the benefits of a long fermentation in our breads: more flavor, more aroma, more health. However, one has to take extra care to avoid over-fermentation and too much sourness, especially when using a sourdough starter and fermentations of up to 48 hours. Fermentation at cold temperatures will aid us to get wonderful breads with a juicy crumb and a flavorful crust.

I started making long fermentation breads when Sébastien Boudet’s ‘Durum Pavé’ bread was proposed as the monthly challenge in the Spanish Bread Forum. This 48-hours fermentation bread became a favorite not only because of its flavor, but also for convenience: splitting the process into several days makes it easier to fit into a busy agenda.

The pros and cons of cold fermentation
Yeast and bacteria growth slows down or even stops at low temperature. At 5ºC (41ºF), yeasts will make higher amounts of some ester compounds that have a fruity and pleasant aroma, such as ethyl acetate, ethyl hexanoate and ethyl octanoate. Moreover, cold will favor heterofermentative over homofermentative bacteria, and hence the production of acetic acid, which acts as an aroma enhancer. In addition, heterofermentative bacteria also produce alcohols with high and pleasant odor activity, such as 2-methyl-1-pentanol, 3-hexen-1-ol or 1-octanol. Finally, a long fermentation with a sourdough starter will increase the concentration of free amino acids which are important flavor agents in the crust, such as ornithine, methionine, phenylalanine, leucine, isoleucine and valine. I still have to read more in especialized scientific journals, but it seems that long fermentations make gluten more digestible and lower the bread glycemic index.
The main drawback of long fermentations is the difficulty to build a starter powerful enough to proof, but still ‘young’ to avoid too much sourness in the bread. Another potential problem is our fridge’s temperature. When doing 48-hours fermentation breads, I found optimal temperatures of about 5-6ºC (41-43ºF).

Approach
Both bulk and final proof will be carried out mostly within the fridge (24 hours each). For the dough to withstand such a long time, we will take into account the following tips to minimize gluten degradation:
1) We will use a sourdough starter to provide acidity. Mild acidity strengthens the gluten network.
2) We will knead well to achieve a strong gluten network.
3) Use a stiff starter rather than a liquid one. Stiff preferments increase dough’s tenacity.
4) Moderate hydration to keep enzymatic activity low.

Bulk fermentation
Leave at room temperature for 1 hour, stretching and folding twice during this time. Transfer to an oiled plastic box with fitting lid. In summer or when the room temperature is high, we will place directly the container in the coldest zone of our fridge. In winter, however, the dough will cool down too fast and fermentation will be impaired. To avoid this, we will place the plastic box containing the dough inside another plastic container (like a matryoshka doll). In this way, the air between both containers will act as an insulator, and we will get a milder cooling slope.
Leave for ~23 hours in the fridge.

Final proof
Take out the dough from the fridge, preshape it and allow it to rest for 30 minutes. Shape and place the dough into a banetton. Depending on the room temperature, leave it for 30 min in the bench (summer) or 60 minutes in a warm place (winter) before placing it again into the fridge for 23 hours more.

Scoring and baking
This kind of bread is prone to more decorative and complicated scoring patterns. Sébastien Boudet’s can be seen in this clip and in this nice scheme by Amadeu Sanz. Lately I have found myself inspired by like Hannah Page’s patterns, see for instance these pics.
Bake a bit longer tan usual to make a darker crust and take advantage of all the aroma and flavor compounds produced in such a long fermentation.

Alternative approach using a stiff starter made with high-gluten flour
It will be easier to monitor both activity and acidity in this way. I cannot tell whether these breads have different taste and aroma than their rye/durum starter counterparts, since I have not tested them in parallel. Perhaps they are subtle differences, I don’t know, but the result is wonderful enough to give it a try.

1) Early in the day, refresh your sourdough starter using high-gluten flour (I use Italian ‘Manitoba flour’, W=400) using a 1:1:0.5 ratio (i.e. 50 gr stiff starter, 50 gr flour, 25 gr water). Allow to triple in volume, it will take 3-4 hours at 25-26ºC (77-79ºF). Refresh again using the same ratio. An active starter will double in volume in 2 hours, and triple in 3-3.5 hours. If your starter is fed regularly, and therefore is active enough, you may not need to do these refreshments. Or refresh just once before the overnight refreshment.

4) One hour before the preferment is ready, prepare the dough and allow it to autolyse. Mix 60 gr whole rye flour, 180 gr durum flour (i.e. Italian rimacinata), 240 gr bread flour and 360 gr of water. Leave for 45-60 min while the preferment is getting ready.

6) Follow the procedure described above. Don’t forget to give a full bake. This bread deserves it.

This is how a long fermentation bread made with a high-gluten starter looks like: 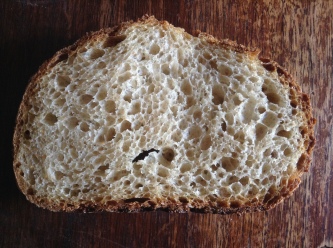 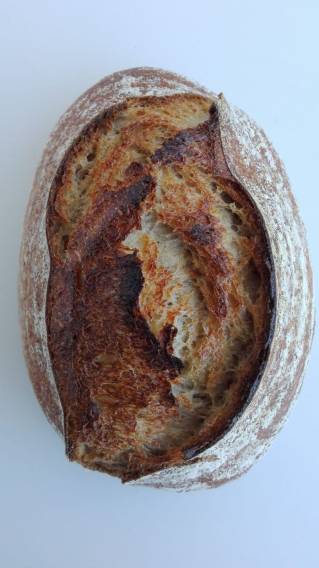 Acknowledgements
I would like to thank Jordi Mercade for his research on Sébastien Boudet’s ‘Durum Pavé’ bread, and to Adolf Peroy for his generosity in providing bibliographical resources. 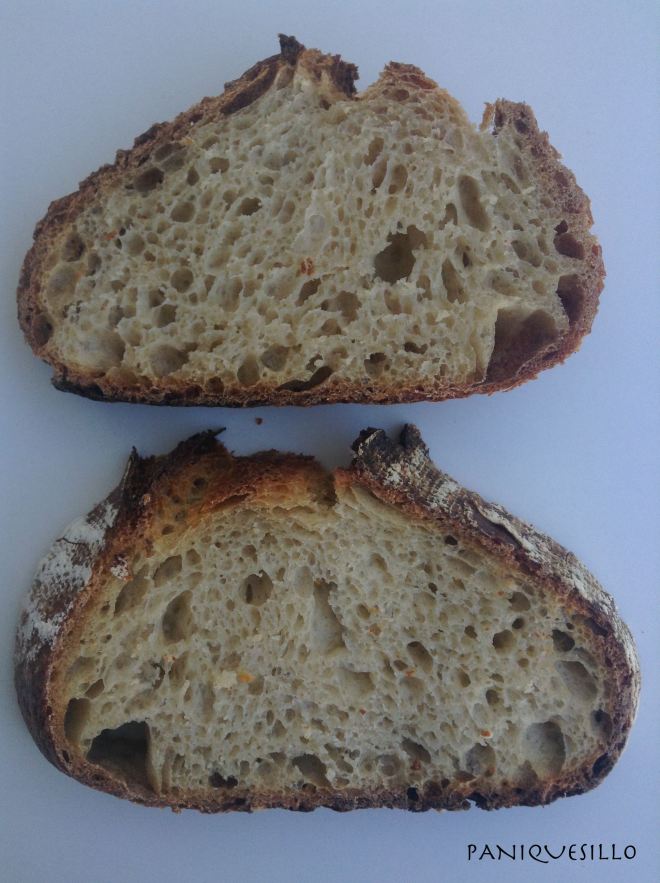